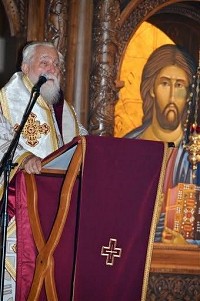 During the upcoming weekend of October 10-11, 2009, St. Sava Serbian Orthodox Church of Boston celebrates the consecration, or blessing, of its new church. A new iconostasis, an icon screen in front of the altar, will be unveiled this weekend. The 13-foot iconostasis, made of solid walnut, was meticulously hand carved over the course of three years in Serbia, and recently arrived in Boston to be installed in its home. In addition to the biblical scenes and scripture incorporated into the carvings, the iconostasis features large hand-painted icons depicting Christ, the Mother of God, and the Apostles. St. Sava Church is also receiving relics, or preserved remains, of St. Czar Lazar of Kosovo, an important Serbian saint from the 14th century.

The weekend’s services will be lead by four bishops, His Eminence Metropolitan Christopher of the Libertyville-Chicago Metropolitanate of the Serbian Orthodox Church in North America, His Grace Bishop Mitrofan of the Eastern American  Diocese, His Grace Bishop Longin of the New Gracanica-Midwestern Diocese, His Grace Metropolitan Nikolaj of Dabrobosanska Metropolitanate, Bosnia, and St. Sava’s own pastor, Very Reverend Father Aleksandar Vlajkovic. Also serving will be many clergy from across the United States, including those of other Orthodox churches in the Boston area. Two visiting choirs will sing during the services.

The unveiling of the iconostasis will be celebrated on Saturday with a Vigil Service at 5 p.m., followed by a free dinner reception, where all are welcome. The following morning at 9 a.m., the Consecration services will take place, followed by the Divine Liturgy. At 1 p.m., a special banquet will be held in the church hall, for which a reservation will be required.